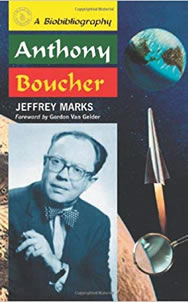 Anthologist, writer and editor Anthony Boucher (legal name William Parker White) has an influence on the mystery and SF fields that is unprecedented. The world mystery convention, affectionately called Bouchercon, was conceived in 1970 and has been host to thousands through the years. Boucher’s contributions and his expertise in the mystery pulp magazines, especially Ellery Queen’s Mystery Magazine, are exemplary.

But one thing has always stood out: the impact Boucher has had for decades on the SF and fantasy fields with the founding of The Magazine of Fantasy in October, 1949. (The second issue became the much heralded and deeply respected greatest SF digest of all time, and still published today, as The Magazine of Fantasy and Science Fiction, edited and produced by Gordon van Gelder.)

The magazine was launched to honor the legacy of Edgar Allan Poe 100 years after his death. Boucher worked with two co-founders: Lawrence Spivak and J. Francis McComas. The magazine helped develop SF greats such as Philip K. Dick and many others.

Not only that, but Boucher was a very productive anthologist and reviewer.