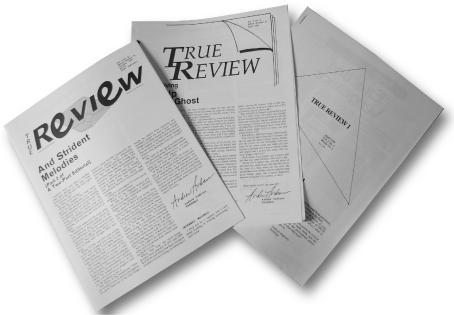 In April 1989, TRUE REVIEW began as an eight-page stapled fan magazine, produced using the first version of desktop publishing software and sent to publishers by regular snail-mail. The concept originated from a review (long since forgotten), in which the reviewer stated the comments were nothing but a "true blue review." With those three words, True Review Editor and Publisher Andrew Andrews went to work at the Millersville Pa. University Computer Science Lab in December 1988 to put together the very first "paste-up" of True Review 1. OTHER AMERICAS, a collection of stories by Norman Spinrad, published in 1988 by Bantam Spectra, was our first review, one of 27 featured in that first issue.Several design changes took place over the years, notably to the nameplate of issue number 21 in April 1994. Another design change came about in October 1997 with issue number 35. Our first Website-only True Review appeared with issue 65 in August 2006.

From its beginning in April 1989 until August 2006, True Review was located in Ephrata, Pa. at two locations: 110 Buchland Rd. and 37 Circle Rock. In July 2008, we moved to "The Sweetest Town on Earth", Hershey, Pa. with issue 70 originating from our current Hockersville Road location.

Today, TRUE REVIEW appears on the Web, with hyperlinks sent to online subscribers and publishers via e-mail notice. We've expanded our book reviews from science fiction, fantasy, horror, and mystery to include biography, self-help, young adult, children's, and others types of fiction and nonfiction. From time to time, we also feature author interviews. Over the past 28 years, we've been blessed to talk to some of the best (Dan Simmons, Bruce Sterling, Connie Willis and Octavia Butler some to mind).

Thanks for coming along for the read!

A Special Tribute To A
Dear Colleague & Friend 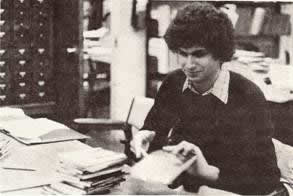 An Inspiration for
True Review 1989-Present

The roots of True Review were really planted one weekend in the fall of 1978.

As Temple University students and good friends, Carl Spicer and I visited our first Philcon – the 1978 convention at the George Washington Motor Lodge in Valley Forge. (The Lodge has since been torn down and is now part of the extension from the Pa. Turnpike interchange and Rt. 422 westbound traffic – what a shame).

Guests of Honor at the convention were two up-and-coming authors: Joan Vinge and some new guy, George R. R. Martin.

Typical poor college students, Carl and I shared a room at the inn. We spent Friday night batting around an idea about starting a magazine. Saturday morning, Carl said, “Why don’t we do our own fanzine?”

Lancaster County, Pennsylvania food freak that I am, I replied, “OK! First, let’s do breakfast.”

Shortly after a blue-plate special of scrambled eggs, Ogre Magazine was born. 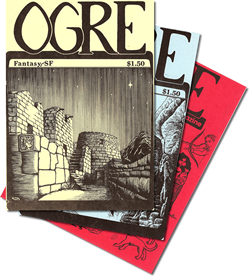 Looking back, you never realize at the time (or sadly appreciate) how many people were instrumental in helping you along the way. Many friends and Temple University colleagues graciously gave of their time and talents to start Ogre Magazine.

Carl was instrumental in contacting and developing all the contributors. Our inaugural issue debuted with a cover by Dave Stembel, an architect major and Temple student. We also had great contributions from author Tony Russo (who contributed to many more Ogre Magazines in years to come) and illustrator Lori Gajewski (also a big Ogre contributor over the years). And excellent contributions, as always, from my Ogre Magazine partner Carl.

Carl and I continued to evolve Ogre with three issues published while we were students. And we continued onward with issues 4, 5, 6, and 7.

We had a great friendship. He was my best man at my first marriage in 1981. As one might expect of a radio-television-film graduate (Temple 1983), he was a great toastmaster!

And we had great working relationship with Ogre. Carl contributed articles through 1989, after which I shelved Ogre (after issue #7) to start True Review.

Carl chose to remain in Philadelphia after his graduation, eventually becoming a social worker. He always cared for others, more than most people I know. Tragically, he was diagnosed with cancer in 2005 and died on July 16 this year.

I last spoke to him at his father’s funeral in Lancaster, Pennsylvania -- I believe the year is correct -- in 1990. That was the last time we were together, though I would see Carl briefly at a distance at Balticon 2006. But I missed my chance to speak with him.

Regrets – I have many. A death will do that to you.

In those days, I was a brash upstart yearning to impact the publishing world. In the process, I didn’t give Carl his due. It was my mistake not to involve him more fully and completely as co-publisher of Ogre for all seven issues, a regret I have to live with the rest of my life. I think that drove our friendship apart in the late 1980s and I wasn’t even aware that he was sick, so I didn’t even have a chance to ask his forgiveness, a great shame. The worst part is I can’t see Carl now to ask him to forgive his lame-brained colleague.

Because there is no doubt about it -- without Carl, there would have been no Ogre and no True Review.