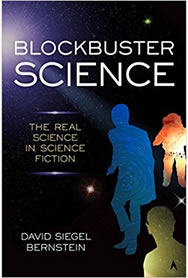 Bernstein has a somewhat ambitious plan for BLOCKBUSTER SCIENCE. The author attempts to explain nearly everything -- that is, the science in all the most famous science fiction novels and stories -- and his grasp of the technicalities of different works of fiction is impressive.

On page 92, Bernstein refers to “Tabby’s Star” (named after Tabetha S. Boyajian, its discoverer) that dims and brightens in odd but repeated patterns. Is this an alien “megastructure surrounding a star”? Perhaps a ringworld? Or a Dyson sphere?

Bernstein longs for a few items (speaking of “Star Trek”) of explanation, to make sense of, as in, exactly how does the Federation of Planets explain their containment of antimatter to propel the warp drive? Also, what is the explanation of “subspace”? And how does all that artificial gravity aboard a starship work?

Bernstein does a great job in providing a history of the terms SF fans are so fond of, including the first mention of the word “starship,” the origins of computers and robots, a fascination with space elevators and lots more.