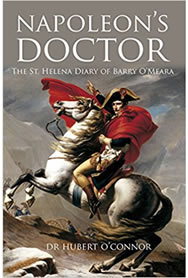 O’Connor notes in a lot of places, in NAPOLEON’S DOCTOR, that Dr. Barry O’Meara took a lot of notes over brandy and cigarettes with the former emperor of France.In the meantime, with this book, we learned a lot about what Bonaparte thought of the British Empire, and how much he wished he could be imprisoned there, instead of St. Helena, far west of the continent of Africa.

I think those who are Napoleon compleatists would love this biography (dual biography?) of a very historic figure.