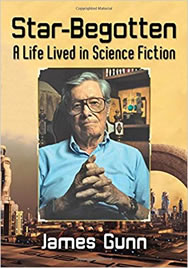 James Gunn was a significant force in my own career as a journalist and reviewer, since the age of 14 when I read, feverishly cover to cover in about two days, his epic SF biopic called ALTERNATE WORLDS: The Illustrated History of Science Fiction, what I still believe is the best SF history course book.

I believe “Murph” did not have much luck (he had trouble tracking down enough copies for the rather-large class). But I know he tried.

As for Gunn, emeritus professor of English at the University of Kansas, the book speaks more to his own influence on the genre and practitioners than his own works of SF.

He recounts that, in 2015, in his 67 years of writing and teaching SF, that he has literally done it all for the genre: he wrote stories, he was honored as an SF Grand Master, has been a multiple award winner and a giant in the field. Gunn is appropriately named the “last of the Golden Age writers still writing” by Io9. But we all know Gunn as someone who truly, deeply, abidingly loves SF.