THE END OF ALL OUR EXPLORING 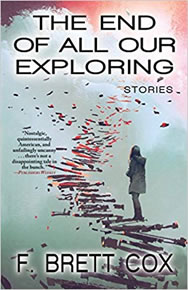 There’s a memorable collection of stories in THE END OF ALL OUR EXPLORING.

"Legacy." A man is haunted by a dybbuk, the spirit of a dead person who wants to possess his body and prevent him from being with his only life and one true love.

"The Amnesia Helmet." Marlena, 11, from Clarksburg, Illinois, loves "Flash Gordon," which she watches at the Rialto Theater. Marlena loves the actor, Buster Crabbe. She knows that Flash Gordon and Buck Rogers are two different people whom Crabbe portrays. Marlena loves the science-fiction show so much that she devises her own Amnesia Helmet and tests it successfully on her "boyfriends," Johnny and Pete. Her helmet works too well, apparently.

Unfortunately for Marlena, her dad makes her throw the device away, after Marlena uses it on her mother to wipe away everything that makes her mom sad. And Marlena doesn’t want to disobey him, or face corporal punishment (that was life back then). Life moves on, and Marlena becomes a successful scientist. Will she work on a different form of Amnesia Helmet?

"See That My Grave is Kept Clean." A boy’s experience as a funeral parlor attendee involves an encounter with an almost-alive body, one which gives him careful instructions. But the boy knows these kinds of things can happen to anybody at a funeral parlor.

"The Light of the Ideal." Richard Henry Stoddard is an inspector of customs for the Port of New York, after the American Civil War ends, a time of tremendous strife. One time, a ship’s captain gives Stoddard a gift: a mysterious box. What does the box contain? Is it something horrible beyond belief, or something of intense beauty?

"The Serpent and the Hatchet Gang." Women in a northeastern town are tired of the misery and heartache caused by liquor, so they take matters into their own hands. Meanwhile, a legend of a serpent lives on. But which is a greater evil: some friendly monster or the suffering caused by the evil of alcoholism in a struggling city?

"Permission to Repatriate Geronimo’s Skull." A modern-day fraternal organization gets ahold of a relic of the days of the Native American Geronimo. There are warriors in any group and the similarities can be stark.

"The Deep End." Charlie loves to swim and is fascinated by the drain covers of pools. Those cover areas are dark and dangerous yet hold potential adventure, or misadventure, for a kid.

"It Came Out of the Sky." Teenagers, summers and UFO sightings: all part of the pastoral life of youth.

Another tale of errant, perhaps evil, teenagers is "Maria Works at Ocean City Nails." Who, exactly, is Maria? And what kind of thrill or danger does this woman pose?

"Where We Would End a War." This is an homage to Alfred Bester’s novel, THE STARS MY DESINTATION, with a world at war and soldiers are teleported -- jaunting, or self-teleportation, is the correct term -- into the thick of things. And for those who want simply to end their life, there is, of course, always the jaunt.