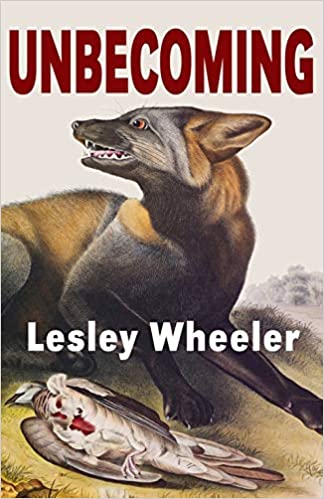 University English Professor Cyn realizes her own power of telekinesis, the ability to move or stop objects from moving simply by using the powers of her mind. This in evidence when Cyn saves Teddy’s cat, Pluto, from being run over by a car.

In UNBECOMING, Cyn has to deal with this power, a family that is teetering on the edge of breakup, problems with her own physical and mental health during per premenopausal stage in life and a host of other issues. The other issues include Fee Ellis, a Welsh poet.

The way Cyn feels and the powers that she has COULD be attributed to the creature she may or may not be turning into, a fox-woman, also called a Kitsune. The crisis of dealing with the dark foxlike entity, Fee, and a university shooter/hostage situation tests Fee’s and Cyn’s powers.

Is being a Kitsune good? Is that Cyn’s fate?

While the premise is entertaining, unfortunately, UNBECOMING detours into a diatribe about the increasing efforts of colleges to push remedial composition instead of literature arts. Sometimes the novel is far too mundane, recounting the banality and predictability of college campus life, which distracts from the fantastical premise of the novel. The novel would benefit from a lot more supernatural narrative and less accounts about Life at a Mundane University.