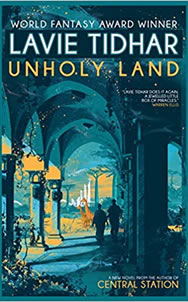 Lior Tirosh apparently can travel through some type of time-dimensional porthole and appear in alternate universes. In this case, Palestine is Palestina, a country in East Africa surrounded by Uganda, Kenya and Tanzania.

Tirosh is apparently a detective, or more than that, a prosecutor, who watches and monitors conspirators posing as threats to his East Africa homeland. But some entity is after him: he wants to know why. And what is he to make of these alternate realities, in which the concept of “Palestine” can exist in various ways?